John and Darla Holinsworth went on the first mission team with us to WCS - June 2012. They have made about 10 trips back with us since then. We don't "recruit" them to be on the team. They help us recruit others to go.

But ..... things happen. They were on a trip and Darla broke her ankle. After consulting with doctors upon their return to OKC, they notified us that they were not going to go after all. Mission Zambia will not be the same without them.

We began to pray earnestly for the Lord to provide someone to join the team and use the plane tickets that were already purchased.

The Lord was faithful! Jack and Terri Bailey will be going with us!! We have known them for over 20 years. They were in our very first nearly, newly married class at PCBC. They have expressed a desire to go on the mission many times. We are excited about having them on the team! You can see their picture in the top left corner below. 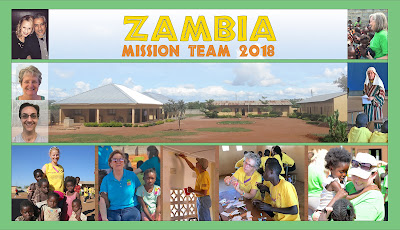