WISDOM in the Community

This sign may not look like a big deal to you. We see voting center signs regularly - often at a school. ..... But it is a very big deal! 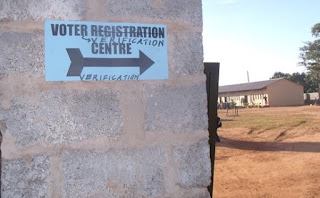 Part 1 of the very big deal:
The city of Ndola recognizes this area as a valid community with voters.

People came into this area - outside a slum of Ndola - and started occupying it. We would call them "homesteaders" or "squatters."

They started building houses from handmade mud bricks or homemade concrete blocks. Recently, the city government recognized the area as a viable community and let the people claim their land.

Part 2 of the very big deal:
This school, started by a ministry as a community school with one grade and one teacher in a church that was falling down, is now a beacon in the community. The city recognizes its prominence and sees it as a trustworthy site for a voter center.

Zambia is having national elections in August. They have a democratic form of government and the people will participate in choosing their next president.
Email ThisBlogThis!Share to TwitterShare to FacebookShare to Pinterest
Newer Post Older Post Home